The latest CEPRES Private Equity Buyout analysis shows the IRR spread between top performing funds and the market median has significantly increased since the GFC.

The analysis, based on primary sourced cash flow data from over 7,000 funds on the CEPRES platform, shows that between Vintage Year 2009 and 2018, median net IRR for buyout funds hover around 15 per cent with a range of 12.9 per cent to 16.4 per cent, whereas top performers based on the upper quartile are at 22 per cent, with the spread widening in most years since the GFC.

Overall median Net IRRs returns show a trend of a tapering down in the last decade, whereas top quartile performance has largely been increasing, as shown in the figure below.
In contrast when it comes to money multiples as measured by Net TVPI (Total value over Paid in capital), both median and top quartile performance has consistently trended down. In the most recent years there is a dip followed by a strong recovery, but it is too early to tell how final results will develop.

“The trend in the last decade shows top quartile GPs driving IRRs at the expense of multiples," says Christopher Godfrey, President, CEPRES. "This can partially be explained by more aggressive timing of deals and a very active secondary buyout market with GPs buying and selling portfolio companies more frequently. Additionally use of subscription credit lines has accelerated IRRs without increasing fundamental investment value. It remains to be seen how credit lines will impact liquidity in the event of any market correction. Investors should look deeper into their portfolios to better understand such financial engineering versus portfolio company fundamentals.” 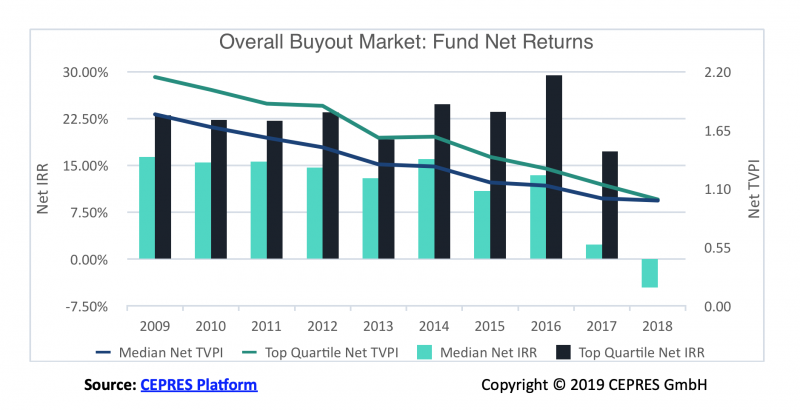 Signs that European M&A activity will pick up the pace in Q3 are "promising", says Credit Suisse

Spanish private capital investment down 67 per cent in H1

Preserving the pipeline: Ventures Platform's Aina on alleviating the effects of Covid-19 on early-stage Nigerian companies

Finding value in the GP/LP relationship

Taken in aggregate: How are PE firms monitoring portfolio performance in 2020?

How investment managers can optimally leverage the Singapore VCC legislation